I am a car. I was anyway. With every new spring, I find a piece of me gone into the red earth beneath my deflated ashy tires. I stand in a line with others like me. Waiting. Not sure for what anymore. Instead of wearing our tires on Route 66, we litter the fields of an untamed farm. For some this brings despair, for they feel as if they were living headstones over their eventual rusted graves. Unlike the others I am happy, for I have lived the wildest life and enjoy the needed rest. I occasionally house whichever critter makes my tattered seats their bed, shielding their tiny bodies from the harshest of winters. It is my humblest joy, to see my rodent guests leave safely. I particularly enjoy the sight of them throwing back a final glance, before hopping away in the wild. A reluctant, but thankful goodbye.

To my right rests an old truck. I consider him my oldest of friends, but he considers me his oldest pain. Rusty has never been one for words. A working mind; not one for intellectual conversation or delightful nostalgia visits. I on the other hand, have been guilty of partaking in the gleeful escape of old memories, much to Rusty’s annoyance. If his expression alone could speak, it would say “Shut the hell up and let me fade in peace.”

I don’t know what led me to befriend such a grumpy old truck, but I think it was noticing that under all our sparkling paint, we were all just bolts and panels of eventual rust. Perhaps it was this fate that made him tolerate me. 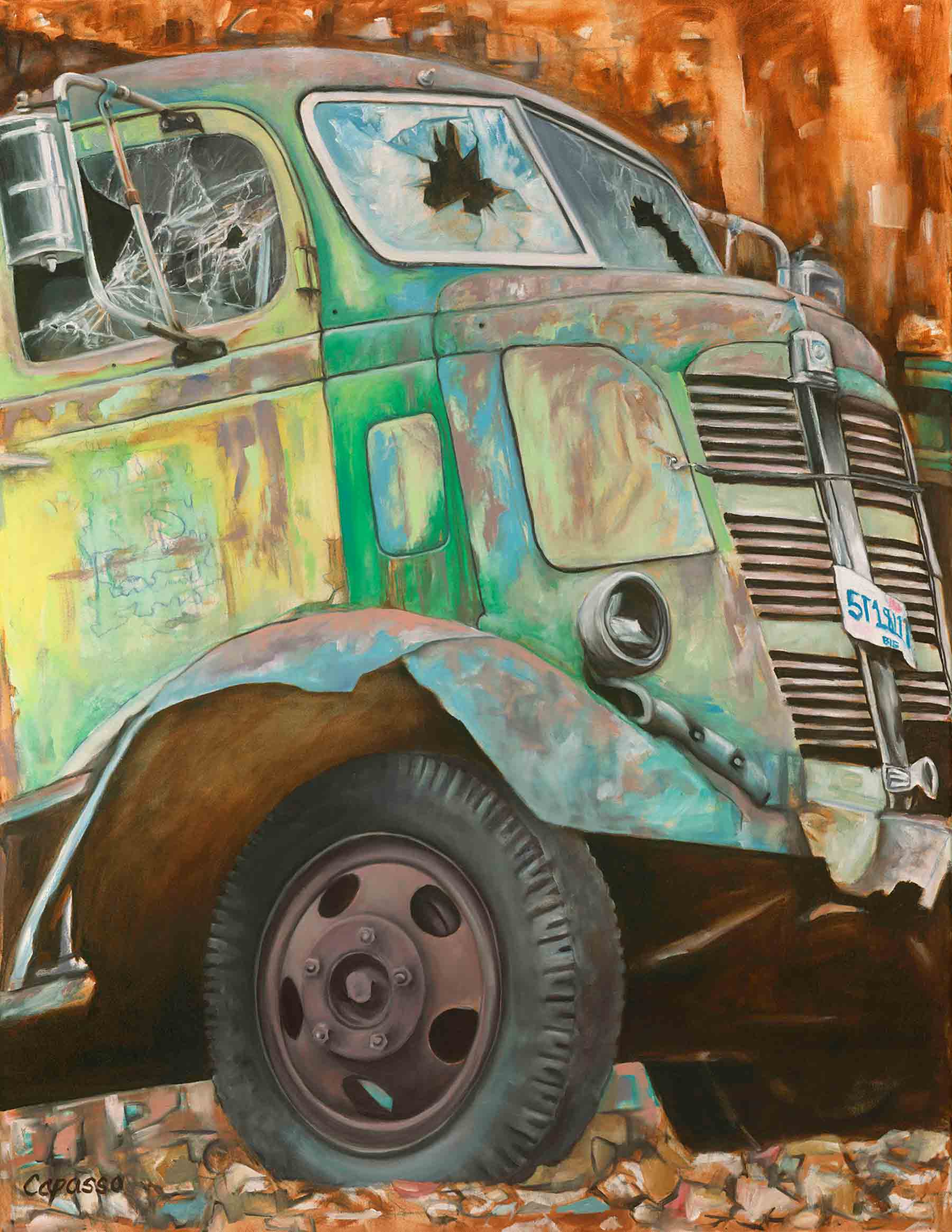 The only time I ever got a glimpse into that old truck’s past, was upon the inspection of an older man and his son passing through. The old man patted his faded door with a withering sigh.

“My brother and I would fight over using your grandpa’s truck. I remember O’Rust here was the sole reason I met your mother.”

“You had your first date with it?”

“Not quite. Your Uncle Roy unhooked the spark plug after I went inside one of the shops in town. Tried to teach me a lesson.” The old man said peering into the dusty window, “I looked like a moron trying to start the car in front of the entire town to see. Your mom came out of the shop, told me ‘Pop the hood idiot.’ ”

The son chuckled, while the old man continued to run his wrinkled hand along the grainy metal. “We’d take this old bucket up the mountain in the summer. She used to irritate me by changing songs before they finished. I got so mad once, I nearly slipped off the mountain on a sharp turn one year.”

“You would.” The young man said looking at the cracked leather seats. “Looks like they salvaged the radio.”

“No, I kept that.” The old man said with a wrinkled smile. “Put it in my next truck.”

“Is that where that old thing came from? Who would replace a perfectly good radio for—”

“Reminded me of her.” He cut him off with his smile fading down his leathered skin. The lines of his face were used to frowning, making his son realize how deep they have gotten over the past few years.

“I miss her too.” The son said before embracing his father.

When they left, I noticed their new red truck looked longingly towards my old friend. Rusty’s hard expressions would soften for the younger truck, sending looks of silent kinship through the amber fields between them. A part of me wondered if in some strange way they were like the two people. A son who carried a small piece of their father inside his heart.

After that day, I often wondered if that was why Rusty never talked around us. I imagined it was because his voice was singing joyfully in the shell of another. That or he too didn’t like exploring painful memories of the past…like the old man. 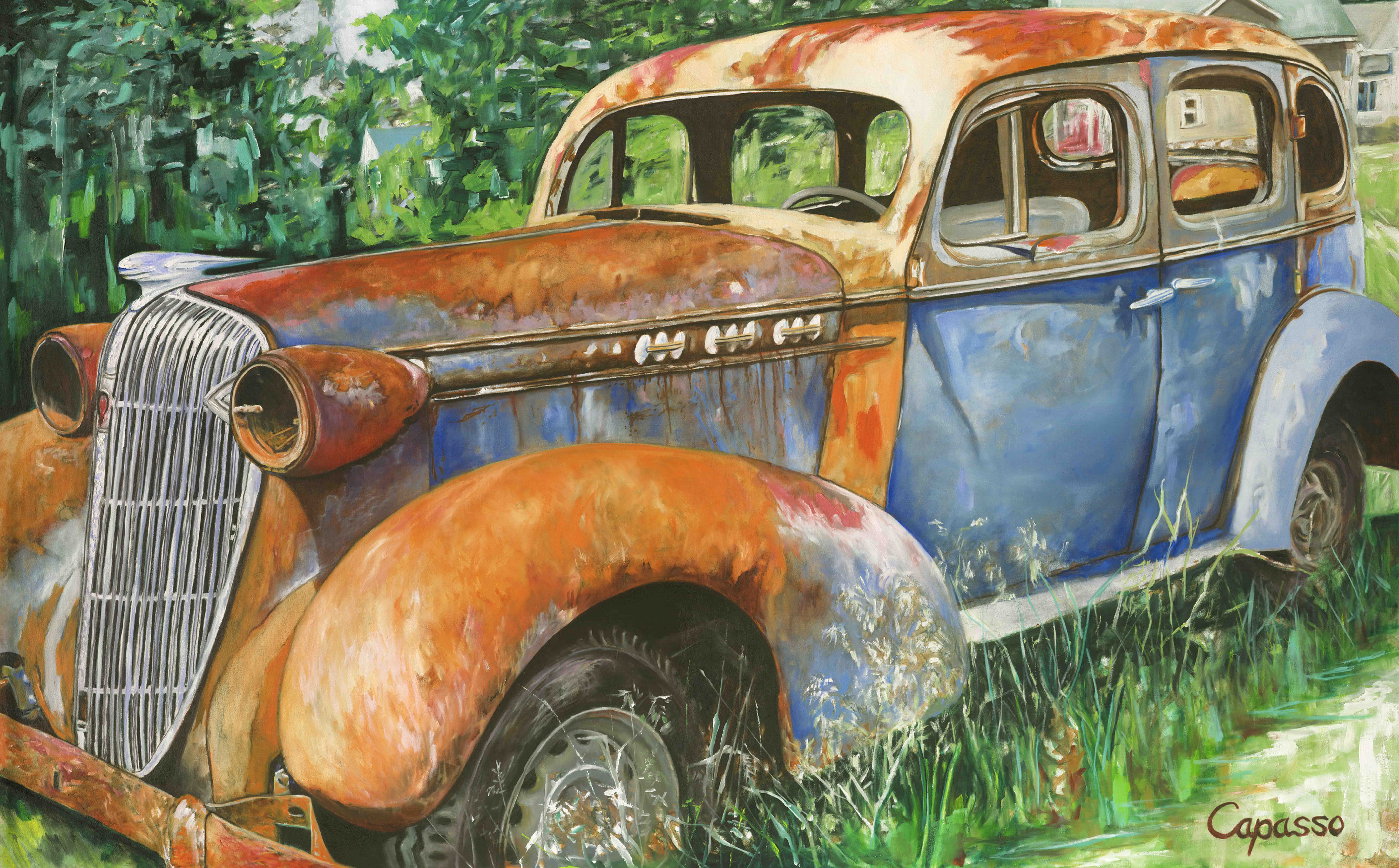 To my left, was the most prideful on our line, Red. I dare say he talked more about his life than I did. His windows, still tight against their seals, boasted a unique time capsule inside. The seats were clean with their original fabric. An old pair of gloves remained on the dashboard, staining the cherry wood by hiding the bleaching sun. He was disgusted by my frequent woodland tenants, often warning me about the dangers of rodents and their tendency to eat wires. He was the most tragic of us all, declaring daily that his owner would return, and they would drive off to the west coast…just like old times. No one had the heart, nor energy for that matter, to tell him his owner sold him for the newer model. “Let him dream.” I would warn Rusty before he would remark about his hopeless dream.

As the sun grew in the east, I feel another flake of my skin peel away. My newest resident, a small fox stretched lazily on my seat as the rays of the sun touched his russet coat through my broken windows. Red shot a disgusted look as the dust of my red armor started to crumble, while Rusty shot a glance of rare sympathy.

Perhaps it bothered me a little, now that I think about it. I myself longed to relive the glory days. I was lucky. I was bought and passed down the very same family who owned the dirt I now rest in, the Parkers. The only reason they put me to pasture, was the fact my manufacturer no longer made the transmission I needed. I think it was their love that made me feel fine in the decision. Seeing them often drive by with newer faces in the backseat often made me my engine hum with the echoes of their love. It made fading seem less final and more pleasantly expected.

When the snow melts, our field is often visited by random families, trying to snap the occasional rustic photo or two. I didn’t mind so much, nor Red, but Rusty often grumbled at the sight of young men with long hair tied into a unkept bun. “Such vane creatures.” He would grumble while Red would mock his words under his breath.

What made us all fearful, was the scrap seekers. Usually coming at night and stealing parts from us. A wire here, a mirror there, and eventually you are left with less of yourself in the morning. Red especially was weary of such thieves. His treasures were timeless and would quite possibly die if even one bolt was stolen.

Of the most curious days I had, was the day where one man sat down behind us and stared. Red stiffened, realizing that the stranger was a painter.  Hoping the painter would capture his most beauteous sides, he pushed himself slightly out of the line. Rusty found such vanity distasteful while I couldn’t understand for the life of me why anyone would be interested in painting someone such as themselves. Hours went by and he hadn’t moved, all except the occasional flick of his brush and squish of his paint tubes. As the man finished his work, he poured the muddy water from his cup into the rusty earth. A toast for his subjects. I appreciated that, for not having anyone offer me such appreciation since my youth. Mainly after managing to start my engine in the cold mornings of winter by old Mr. Parker. I wonder what the man painted, perhaps Red’s classic elegance or Rusty’s rugged charm. I could only guess.

For a link to Tachina Eva's books "The Paralleled Series" please click here.